React Vs NodeJS: What are the key differences? 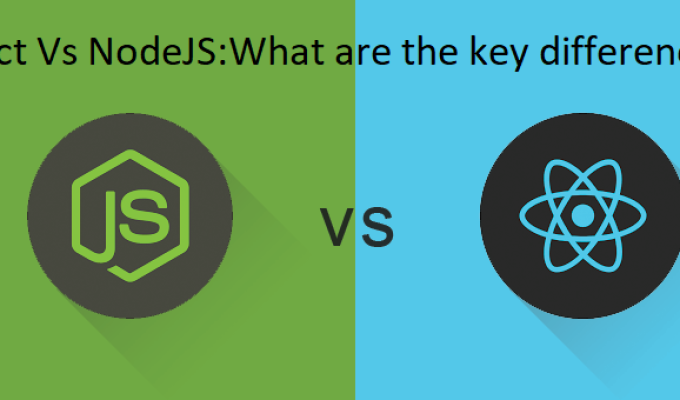 React is basically a front-end library, while Node.js is normally used at the server-side, or at backend. Neither React nor Node.js are from any similar category. They are totally distinct from each other.

React.js is the Javascript library. It was developed by Facebook in 2013. This library was developed in order to upgrade and enrich the UI for the web apps. The framework has improvised a lot over time. React.js is open-source and backs various inbuilt modules and functions such as form module, routing module, and many more. ReactJS is also used by many developers to make single-page Web apps.

Node.js is a server-side language which makes use of a javascript runtime environment in order to implement the javascript code to execute outside the browser. Node.js is built on Google Chrome’s V8 JavaScript Engine. This means that applications that are created with Node.js are basically written in JavaScript, which makes it very simple, and can function within the runtime of Node.js on OS X, Microsoft Windows, and also Linux.

Node.js is an open-source framework and supports a lot of modules through NPM (Node Package Manager). Nodejs is a lot faster and robust.

Nodejs vs React: What are their usage statistics and how popular they are globally?

Let us now compare usage statistics and global popularity of both Nodejs and Reactjs:

Approximately 1,408,233 customers use Reactjs for their frontend development. Additionally, approx 10,418,340 live websites utilize React, and apart from them 2,306,019 sites have used it before.

According to Stackoverflow Survey 2021, React was the most sought after web framework.

According to Node.js User Survey Report, approximately 49.9% developers utilized Node.js. This made it one of the most used tools, libraries, and frameworks, in 2019.

Understanding the Comparison Parameters for Nodejs vs React

React brings to the table a comparatively simpler learning curve when compared to few others. This is because developers don’t need to invest time in learning the language of programming again. Simply speaking, React is developed on the language which developers are already familiar with i.e. JavaScript. Because of its straightforward design, immensely comprehensive documentation, and utilization of JSX, React is the superior library which makes web designing and development simpler to carry out and restate.

In comparison to React.js, Node can be learned easily. However, implementation of web applications is more difficult and takes more effort. Furthermore, the presence of asynchronous programming which basically executes the non-blocking code makes it even more complicated. However, this actually does not affect or prevent the implementation of a piece of code. Sometimes, this is why it is complicated to program.

The core purpose was to enable various teams to function effectively on individual and different characteristics of a web application. This type of approach boosts the productivity of developers and also simultaneously reduces time-to-market.

How Micro Frontends in React Work?

The idea of micro frontends presents a method to decompose a scalable and extendable frontend into lesser and more controllable chunks. During a certain period of time, specific developers and their team operate on these chunks till the time the code is all set to be deployed as groups of loosely coupled applications.

Furthermore, the team of developers is also accountable for a different set which primarily supports different content. Micro frontends that are present in React are more friendly and also a little bulky. React.js enables indirect communication of micro frontends internally, thus reducing direct coupling. Selecting React is a worthy solution which drives the procedure of passing data and callbacks downwards. This outcome frames the contrast even more explicitly.

How Microservices in Node.js Work?

In a way, Node certainly correlates microservices. This is because both work as a tech stack and allows organizations to gain security, suppleness, agility, and outstanding performance. By utilizing microservices along with Node enables you to create apps without any kind of complexities. This influential amalgamation can also strengthen highly-extensible apps and control thousands of synchronous requests without affecting the speed of the system.

By making use of microservices in node.js supported eCommerce apps authorizes various different services. It enables them to update and grow separately. If you are an eCommerce owner, hire remote node js developer to capitalize this feature.

It is imperative for your developers to have extensive community support in order to work effortlessly on any project around and with the framework.

React.js is founded and managed by Facebook. Hence, it has the unquestionable support of a talented team that is always available for help. One of the positive aspects of it is that it receives frequent updates which enable developers to work effortlessly without any hitches. In this way, developers also learn and update themselves continuously. A lot of prevalent and widely used popular websites like Airbnb, Uber, Netflix, Asana, PayPal, and Khan Academy use React.

Node.js, just like React, is also an open-source framework. This means that its community regularly and zestfully indulges in fixing occasional bugs and improvising the languages. The community which consists of talented developers have leading and finest tips at their disposal.

Here are some important takeaways regarding both Nodejs and React:

React can function on the server-side. Meanwhile, the virtual DOM will be imparted. This will enable it to come back to the browser in the form of a normal web page.

The Only Guide You Need on How Much Does it Cost to Paint Kitchen Cabinets?